Between other jobs, I’ve been able to put some (mostly late-night) time into porting Enclosure to iOS.

My first thought was that, “hey, it’s both OpenGL – it can’t be that hard to convert Java to Objective-C”. As it turns out, it’s a bit of a nightmare, so I quickly gave up that idea, and instead turned my attention to another tool I’ve been wanting to use for a while: Unity.

Let me start by saying that Unity is nothing short of awesome. The only downside is that I have to write the code in MonoDevelop which is not much more than a glorified text editor – being used to IDE’s from jetBrains (I use both IDEA and AppCode), Mono is a bit of a pain in the neck.

Anyway, choosing Unity meant re-thinking the visual appearance of Enclosure – the main gameplay will be the same, but it will look like a different game entirely. Here’s a sneak peek: 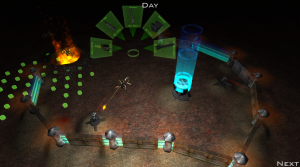 I have most of the basic gameplay-features in place, and because it’s C#, I can grab big chunks of code from the Android game and more or less paste them into Unity. Much simpler than converting to Objective-C.

Right now I have a ton of other things to attend to, but hopefully I’ll find time to finish it in the coming months.

I just had to take 5 minutes to write about this…

Last year I did a small Android app for a client, it was just a prototype but it had to run on a specific device: A Sony Ericsson Xperia. It was supposed to be nothing more than a couple of days work, and everything looked fine until I tried debugging the app on the device.

The damn thing just wouldn’t connect – I downloaded and installed a host of drivers and countless megabytes of Sony fluff, but finally ended up stitching something together from various 3rd party sources. It took almost two days before I could get the debugger connected.

I should have known, I guess, since I had a similar nightmare on a laptop with my HTC Desire some half year earlier, but back then I figured it was just the laptop that was messed up.

Now, today, I had to do another small Android project and since my HTC Desire was so low on battery that it would not run from the USB connection on my MacBook, I hesitantly dusted off the Xperia and plugged it in.

I pressed “Debug” in IDEA and lo and behold, the app instantly fired up on the device.

How ironic is it that Android development is easier on a Mac? 🙂

(Update: The HTC finally charged up so I tested it as well – same story! No need for annoying HTC sync apps and funky driver setups – it just works).

On January the 16th 2012, after a month of long nights, non-family weekends and an x-mas vacation spend largely behind the screen of my older borrowed (white) iMac (thanks MiP) , I finally got the mail from Apple I had been waiting for: The MathRat had been approved for sale.

It was also more or less exactly a month after I had finally given up on Android market after wasting 6 months developing two different games for a market that obviously didn’t care, so as we approach the quarter mark for the launch of my first iOS entry, I thought it might make sense to look back at the time that passed and share what I have learned.

The first major revelation, coming from Android, was that the Math Rat was selling – yes actually selling as in paid-for downloads – from day 1, with only a single day of zero downloads in the entire period so far.

Has it paid for itself? Absolutely not, and there’s a good deal of road to cover before it does, but as long as it does not suddenly drop dead, there is no reason to think it will not get there, eventually. Sales numbers fluctuate wildly from day to day, but over the whole three month period there’s a very clear (slightly rising) median line that is very comforting.

Free is worth just that

The second thing that struck me – and I’m about to embark on a rant here, so feel free to skip to the real retrospective below – was how the app was able to sell without offering a free trial version – a scenario completely unheard of on Android, especially for a small independent developer.

We’ve all heard the marketing wise-talk, of course:

And, what’s worse, you’ve taught your customers that your apps are worthless.

Worthless = worth nothing = free … Think about it!

Free is an infectious decease – like a virus spreading from app to app threatening to leave the entire app landscape desolate and ruined. It happened to Android (unless you think Ads are a heaven-send), luckily for the App Store it has not quite happened there yet, but it is not immune.

A bit melodramatic, maybe, but the problem with free is real and I for one am not going to be part of it.

The third thing I’d like to mention is less of a surprise, but still worth bringing up as I frequently hear the argument that poor earnings of a single app is not a problem as it will work out just fine as soon as you have enough apps.

While there is some truth to it, there are two reasons why I think it is bad advice:

Every little thing you do to promote your app shows up in sales, but unfortunately the opposite is also true – If you let go, sales drop immediately. So if you try to compensate with volume, you will fail for the simple reason that you won’t have enough time in your life to reach critical mass.

Ok, enough if my mindless babbling, here is what worked for the Math Rat and what didn’t:

“Pappas Appar” is a Swedish site which reviews apps for kids. It is run by father of two, Daniel, who is very serious about what he does. His reviews are honest and he provides some extremely helpful feedback. He is also very fast to respond which is nice when you feel you have addressed some of his concerns and would like that 3/5 rating re-reviewed 🙂

Pappas Appar has become something of a central hub for kids apps in Sweden and his ability to keep his integrity by staying financially independent of the various players in the market means that a good review by Pappas Appar is very valuable.

“Mors Apps” is a Danish equivalent to “Pappas Appar” with a similar background and similar set of values. Judging from our sales in Sweden vs. Denmark I would estimate that  it does not have quite the same penetration yet, but other factors may be involved.

“DK Apps” is an iOS app which lists apps in Danish or with Danish content. It has a massive penetration in the Danish market – a single day on the front page boosted our sale by 10 times.

Redeem Now is a web site run by Daniel of Pappas Appar. The site provides a simple and very convenient way to track and distribute promocodes. The two primary benefits (vs. just giving out the codes) are that you can see immediately if a code has been used, and you can get a count of how many people have tried to use a code, giving you an idea of how much exposure a promo code is getting.