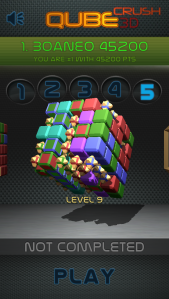 7 days after I got up in the middle of the night and – for no particular reason – decided to add my own peculiar contribution to a very long list of color-match puzzle games for mobile devices, I finished and uploaded the release build of Qube Crush 3D.

That’s 7 days (and nights) from initial spark to a completed F2P game with 50 levels of brain bending puzzles uploaded to the App Store.

Just to prove to myself that it wasn’t a fluke or a happy accident, and since I had a week or two to burn while waiting for the AppStore review process to complete, I decided to do another game in the mean time.

This was to be a 2 player arena battle game and the result is Magic Micro Battle Arena, which I completed in just 5 days – mostly because it has no IAPs or Ads and no highscores, so less integration work and no horrible IAP testing. Ironically, it also got approved faster because Qube Crush got rejected due to an issue with my AdColony integration.

So two fully functional playable games completed in two weeks. These are not Gears of War or Doom 8, and their feature lists has been cut to the bones, but anyone with an idea of just how much time the crud of project setup, tool chain woes, app-store nightmares and 3rd party integration (not to mention play-testing) usually takes, should realize what an amazingly short time-to-market that is.

The rapid development probably means I missed a bug here or there, and I could certainly have polished both of these two games for another couple of weeks, or months even, but before I do, I’d like to know that there is at least someone out there who wants to play it ;).

Because my investment is so limited, I can try whatever crazy ideas I come up with, and if it fails, I can move on without bleeding to death.

And that’s really why I’m writing this blog post. Because of how this is all possible. Obviously, I *am* a pretty awesome developer (hah! 🙂 ) but, truth be told, I owe most of my productivity to the game-dev tools we have at our disposal today, and at the heart of those is (in my case at least) Unity3d.

I can’t say enough good things about Unity – sure, it has its bugs and quirks and annoying issues, but at the end of the day it’s just so insanely productive that I hardly notice.

I run a 4-screen setup with Unity and Blender on a big cinema display, photoshop on my Cintiq and Mono on my laptop with either my phone or iPad hooked up for testing – with Unity’s rapid automatic import there is no sense of context switching, it’s as if it’s one big application build up of state-of-the-art parts (minus Mono which is anything but).

Testing and trying out stuff in Unity is so quick and easy that in two weeks, I have not once had to start the debugger. Mind you, if launching the debugger from Mono wasn’t such a nightmare, I’d probably been able to finish the games even without cancelling my weekends 🙂

So here’s to the guys at Unity: YOU ROCK!

(But please find a replacement for Mono. For those of us who’d rather chop off our left arm than install Windows, Mono is still (if only barely) the preferable option, but I’d really like to see a Unity/JetBrains C# IDE with bullet proof indexing, a nice coder friendly editor and proper refactoring that does not break script-to-game-object bindings).

If you don’t have an iOS device, wait for an Android update, or check out a video of Qube Crush here:

*) Yes, I know what I’ve previously said about “free apps”, I still think it’s a fundamentally bad idea, but the sad fact of the matter seems to be that as an unknown IP or small game developer you are left with a choice between “free” and, well, nothing else at all… So much for not being part of the problem, though.